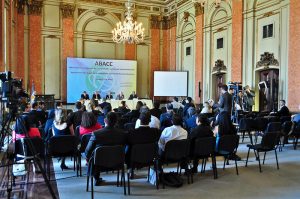 During this year of 2011, ABACC has commemorated the 20th anniversary of its creation. Among the scheduled celebrations, a seminar was held in Rio de Janeiro, Brazil, at the Palácio Itamaraty, on the 10th and 11th November 2011.
The programme of the event included round tables dealing with the international scenario of non-proliferation, the peaceful use of nuclear energy and the national, regional and international safeguards systems. The presentations highlighted these topics, as well as ABACC’s role and performance within this context.
The event had the presence of outstanding personalities in the nuclear area, including safeguards institutions, regulatory agencies, operators of nuclear facilities and institutions involved in nuclear politics from Argentina, Brazil, South Korea, Canada, Japan, the United States, the IAEA and the OPANAL. Furthermore, there was an outstanding intervention by diplomatic officials from Argentina and Brazil, who lectured on the “political framework” in the opening and closing sessions of the seminar.