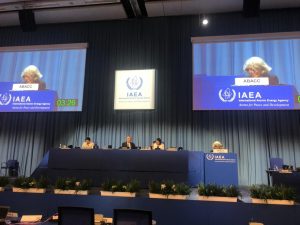 The 65th Session of the International Atomic Energy Agency (IAEA) General Conference was held from 20 to 24 September in Vienna, Austria.

On September 21, in the context of the 30th anniversary of ABACC, the side event “Commemoration of the 30th Anniversary of the Agency for Accounting and Control of Nuclear Materials (ABACC)” was held. The Minister of Mines and Energy of Brazil, Mr. Bento de Albuquerque, the president of the Board of the Autoridad Regulatoria Nuclear of Argentina, Mr. Agustín Arbor González and Brazil, Mr. Gustavo Ainchil and Mr. Carlos Duarte, respectively, the IAEA Director General of IAEA, Ambassador Rafael Grossi and the ABACC Secretaries, Ms. Elena Maceiras (in person) and Mr. Marco Marzo (virtually) participated at the event.

On September 22, the Secretary of ABACC, Mrs. Elena Maceiras, made the statement in the plenary session of the General Conference (statement) highlighting the importance of the creation of ABACC, the coordination of activities with the OIEA and the activities carried out in 2021.