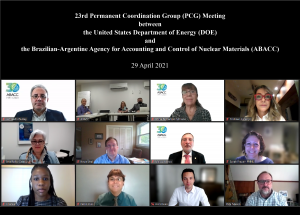 The 23rd Meeting of the Permanent Group ABACC-DoE (virtual) was held between the 29th and 30th of April, in order to review the state of the technical cooperation between the both institutions. There were highlighted the results and benefits obtained from this collaboration which beginning dates back to 1994, with the signature of the “Agreement between the Department of Energy of the United States of North America and ABACC”, regarding research and development in verification, accounting and control of nuclear materials, as well as in advanced containment and surveillance technologies for application in international safeguards areas. Also, the relevance of ABACC’s 30th anniversary and the commemorative activities planned during this period were highlighted.

The progress of ongoing collaborative actions in the area of destructive testing of nuclear material (AD) was considered, highlighting the importance of the intercomparison exercises of the ABACC laboratory network; the cooperation for the validation of the “ABACC-Cristallini Method” for UF6 sampling; the successful fulfillment of the non-destructive testing (NDA) upgrade goal, which is part of ABACC’s safeguards approach for uranium enrichment facility, and the cooperation of the DoE with countries in the area of bulk analysis of surface smear. Regarding potential new areas of collaboration, NDA detectors and associated software for the verification of nuclear material and new generation containment and surveillance systems were identified, as well as platforms and tools for remote and virtual training of ABACCC inspectors.