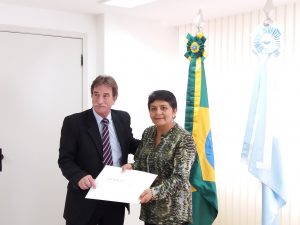 During the visit, they delivered a commemorative photograph of the 50th Anniversary of the Signing of the Treaty for the Prohibition of Nuclear Weapons in Latin America and the Caribbean  (Treaty of Tlatelolco), which took place in Mexico City, this year, with the presence of  the Deputy secretary of ABACC, Mr. Sergio Solmesky.