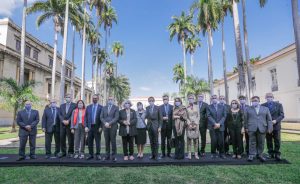 On July 19, 2021, a commemorative event on the occasion of the 30th anniversary of ABACC was held at the Itamaraty Palace in Rio de Janeiro. ABACC was created on July 18, 1991 with the signing of the Agreement between the Republic of Argentina and the Federative Republic of Brazil for the Exclusively Peaceful Use of Nuclear Energy.

The ceremony was attended by the Minister of Foreign Affairs of Brazil, Carlos Alberto Franco França, and the Minister of Foreign Affairs of Argentina, Felipe Carlos Solá. There were also present on the Brazilian side the Minister of Mines and Energy, Bento Albuquerque, and the Minister of Science, Technology and Innovation, Marcos Pontes, and on the Argentine side, the Minister of Science and Technology, Roberto Salvarezza, and representing the Secretary General of the Presidency, Agustín Arbor González. The event was attended by the Director General of the International Atomic Energy Agency, Rafael Mariano Grossi. Video messages from the OPANAL Secretary-General, Flavio Bonzanini and the High Representative of the UN Secretary-General for Disarmament Affairs, Izumi Nakamitsu, were carried out.

Closing the event, the Ministers of Foreign Affairs from both countries unveiled the commemorative plaque on the 30th anniversary of ABACC.

The event is available on Youtube channel of ABACC