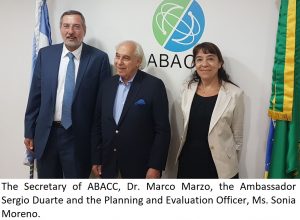 On January 17, ABACC received the visit of Ambassador Sergio Queiroz Duarte. From 2007 to 2012 he was United Nations High Representative for Disarmament Affairs. He is currently the president of the non-governmental Pugwash Conferences on Science and International Affairs, founded in 1957 and Nobel Peace Prize in 1995.

During the visit, topics such as disarmament, non-proliferation and international security were discussed. The meeting was attended by the Secretary of the ABACC, Dr. Marco Marzo, and the technical officers.